The cost of inclusion. The weight of transfer week. The threshold of celebrity. This week we are discussing all things diversity, deception, and the depth of water in the Weekly Round-Up.

That’s the message coming from the director of communications for Pride in London, Asad Dhunna, who is addressing brands only highlighting a small subset of the LGBTQ+ community in their adverts. More and more companies are pertaining to commit to diversity inclusion in advertising. However, with only the G of the acronym being used, they are leaving a lot more out than they are letting in. It should also be noted that as far as the gay men who are represented, the majority of them are also white – one small step for man, eh? Former brand director of Aviva, Jan Gooding, puts it best when asking brands, “Have you thought about the fact there are many other different forms of sexual orientation and gender identity?”

We looked into the issues surrounding LGBTQ+ tokenism and the gay for pay nature of brands during Pride in an earlier Weekly Round-Up. And once again we’ve arrived at the question, for brands, is diversity inclusion simply a ploy to push purchases? And, further to that, are gay, white men simply the most sellable of the community?

Have you seen this footballer? 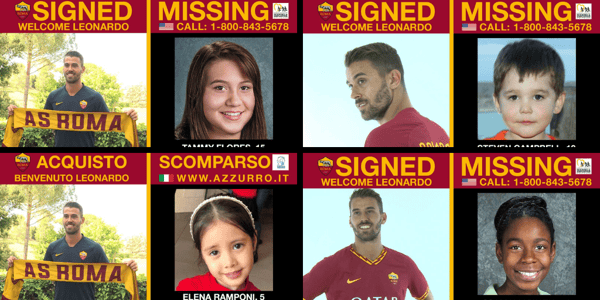 With a reported 4 billion fans, football is widely regarded as the world’s most popular sport. This multitude of followers makes it a highly effective platform for promotion, one which is highly coveted by brands. And with transfer season currently in play, eyes aloo over the world can be found locked to their screens, in anticipation of Summer signings. This year, rather than simply submitting to the brand with the biggest budget, Italian team, AS Roma, are taking a different approach, by using their visibility to highlight missing children. Each signing video, which will be  documented on the club’s own channels, among others, will not only feature the signing of a new player, but also details on children who have gone missing across the U.S, the U.K, Australia, and Europe.

On the campaign, head of strategy at AS Roma, Paul Rogers said, “We [though we] could try something updated for the social media generation. We have a massive social media following and our announcements generate incredible reach and awareness, all over the world, so we thought that at the exact moment when the world’s attention is on the club’s announcement, we could use our social media channels, not for self-promotion, but rather to help both the National Center for Missing and Exploited Children and Telefono Azzurro find missing children.”

In the latest case of ‘influencers under fire’, earlier this week, parenting blogger, Sarah Willox Knott, was forced to take down a sponsored post on her social channels after the Advertising Standards Authority (ASA) received complaints of irresponsible advertising. In partnership with pharmaceutical brand, Sanofi, the This Mama Life blogger promoted Phenergan Night Time with the following post: “The worry of not sleeping then adds to it all and I end up a complete and utter zombie!! Last time this happened I tried out Phenergan Night Time, which really helped. It is a pharmacy only, short term solution to insomnia for adults which works by inducing a sleepy effect thanks to its active ingredient, promethazine hydrochloride, helping you to sleep through the night. Do you guys fall asleep easily or are you night time overthinkers like me? #AD #sleep”. The post was accompanied by a picture of the mother in the foreground and the sleeping pills in the background. Complaints quickly followed, citing that celebrities should not be allowed to endorse medication. The pharma company countered this by saying that because of Willox Knott’s reasonably small following of just 37.8K followers, she is not a celebrity. However, the ASA has listened to the people and rules against big pharma, stating that even small influencers of 30,000+ followers should be given celebrity status.

From one misleading advertising case to...perhaps another one. While the Australian Competition and Consumer Commission (ACCC) is currently in the midst of creating a case against Samsung for misleading its consumers over the water-resistance nature of their phones, it could be said that the validity of the complaints are as murky as the water the phones can, supposedly, swim in. Chair of the commission, Rod Sims, is claiming that the types of water that Samsung depicted as being phone-friendly are actually not. “The ACCC alleges Samsung’s advertisements falsely and misleadingly represented Galaxy phones would be suitable for use in, or for exposure to all types of water, including in ocean water and swimming pools, and would not be affected by such exposure to water for the life of the phone, when this was not the case.” Unflinching, Samsung has reportedly said that they are sticking by their ads, leaving us on the fence. Or, more aptly, between two swimming lanes. While we fully respect the efforts of those working to upkeep the standards of transparent advertising, we are not sure we respect someone who goes swimming with their phone.

Barclay’s, Visa, Guinness, it has been a great year for the sponsorship of female sporting professionals. After years of being overlooked and underappreciated, it would seem as though the ladies are finally stepping into the spotlight with the backing of stellar brands. While this is undoubtedly a great step forward, the route to get here has not been without its road bumps.

Nike, the sponsor of the English Women’s football team, was exposed last year for driving their Just Do It slogan a little too far. The sports giant had previously been reducing their sponsorship payments of females athletes who couldn’t currently Do It as they were on maternity leave. While, following the exposure, Nike amended this practice, this case of discrimination does leave a wariness surrounding big brands’ loyalty to female athletes. Women’s Sport Trust board director, Laura Weston, expresses her worry that brands are using women as a “marketing trend”. She says, “they’ve all got these brand values and they love talking about them in PowerPoints, so it would be nice if they actually did something. Don’t say it, do it,”